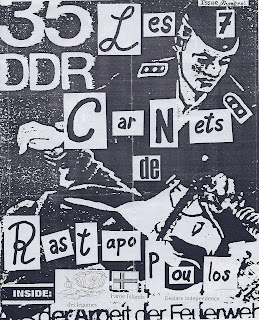 LES CARNETS DE RASTOPOPOULOS #7
2-7 Larch Street
Ottawa, Ontario
Canada
KIR6W4
Rarely have I encountered a zine-intro wherein the author doesn’t make excuses for why it took so long for that particular issue to come out, myself definitely included. This author, however, has by far the most legit excuse I’ve seen yet, and pictures to prove it. Someone drove a mini-van through his living room, thus rendering him homeless for six months. Now that he’s back in action he’s put out Les Carnets De Rastapopoulos #7. This zine is composed almost entirely of mini history essays. He doesn’t give much lead-in and jumps immediately into the subject matter. Subjects covered, William Topaz McGonagall-the world’s worst poet, Pope Alexander VI-an unrepentant murderous swashbuckler, and the history of the Faroe Islands struggle to gain independence from Denmark through the use of World Cup Soccer. I really enjoyed the articles and found a lot of useful information throughout. My only personal critique of the Faroe Island essay would be the failure to mention the brutal annual slaughter of pilot whales by the Faroese which, in my opinion, renders their sovereignty plee worthless until it stops. But that’s just me being really pissed off about it. The zine, however, is great.
Posted by Randy Spaghetti at 9:49 PM