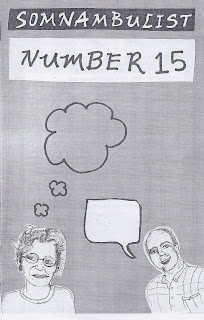 SOMNAMBULIST #15
Martha Grover
pob 14871
Portland, OR 97293
This zine consists entirely of Martha’s notes taken during her weekly family meetings. She had gotten very sick with Cushing’s disease and had to move back in with her parents and four siblings. The zine starts fast, and immediately jumps into the weekly meetings without much explanation or lead up. It doesn’t take long, however, to become familiar with the personalities behind the names, and get a good sense of the who, what, when, and where of this family. There is a lot of squabbling over space in the cupboard and who is responsible for what chore, and believe it or not, this is really funny. It’s a pretty long zine, spanning the course of an entire year, and by the end of it I felt like I really knew this family well. It’s mostly dialogue and short observations centered around the mundane issues present in all communal living situations, “I ask Simone and Sarah to stop leaving half-eaten avocados in the fridge. Sarah says that she never does that. Simone says she will stop doing that….I say that I will attempt to store my urine for my lab tests in a cooler instead of the fridge. Everyone thinks that’s a good idea.” I really enjoyed this zine.
Posted by Randy Spaghetti at 8:15 AM