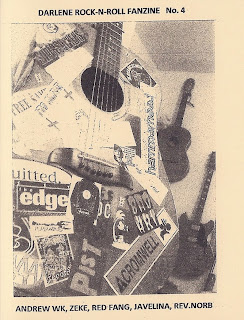 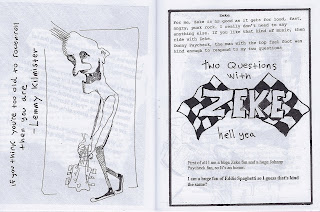 "Darlene #4 was apparently five years in the making. Yeah, that much time passed since #3 and I don’t fully understand why because this was SO FREAKING AWESOME. Zines like this one are what first launched my teenage punk-ass into DIY print culture; people professing their love for music and being kind enough to share it with all the other nerds out there in the world.

This guy is clearly obsessed with Rock-N-Roll. Like, OCD status. He also has an enviously extensive knowledge of the genre. His nerdiness regarding the subject and friendly, non-pretentious voice made for a great intro essay about aging rockers, Napalm Death, and the appropriate uses of the prefix “post” and how it relates (or doesn’t) to new music. His writing is the highlight, but he followed it up with some fun interviews: Zeke and Javelina to give an example, and even a brief chat with Andrew WK (huh?).

This was too much fun to read, and as I said before, little gems like this remind me why I love zines so much. So, Mr. Spaghetti, please figure out how to manage your personal life in order to produce Darlene in a more timely manner. I’ll be waiting by the mailbox".-Kelly Dalbeck, Ashcan Magazine


"...Our author Randy also harps on something I also hate, the use of "post" before everything and coins a new term, PSPA post-scenester pseudo-audiencism, which describes the station of the older punk who has moved to a non-urban place, a real job and relies on the internet to hook them up for good music...my favorites are the kooky illustrations and the "Two Questions" interviews, in which Andrew WK fits in. It's a funny zine and a good read, especially for us aging punks" -Mariam Bastani, Maximumrocknroll

"Essentially, Darlene consists of personal recollections and anecdotes from the mind of an obsessed music fan who knows what he likes and doesn't worry about trends and scenes. His writing is pretty engaging and draws you into his little world which appears to consist almost exclusively of drinking, talking rock, and listening to rock....This dude goes above and beyond the written call of duty, to points of near-obsession and you shouldn't be suprised if he ends up telling you that he was the guy on Slayer's DVD with the band's logo carved into his flesh." -Kevin Stewart-Panko: Metal Maniacs

"I've gotta hand it to Randy Spaghetti, Only he could explain the power of Slayer by comparing them to a cute and little (but brutal) songbird called the Loggerhead Shrike and actually get away with it. Darlene has some excellent writing." - Maximumrocknroll

"Within the pages of Darlene No. 3 (2005), Randy Spaghetti expresses undying fealty to Slayer, the Melvins, and cheap booze; with this fourth issue appearing five years later, his loyalties are unchanged. Darlene touts itself as a "Rock-N-Roll Fanzine," straight, no chaser, and fulfills that function admirably. Any fears that a move to the backwoods of Idaho would temper the irreverent wit that compared Slayer's longevity with the feeding patterns of the loggerhead shrike in No. 3 will be quelled by the fourth issue's two-question interviews with the likes of Andrew W.K. ("Party Hard" singer and motivational speaker) and Zeke and a tongue-in-cheek essay on "Post-Scenester Pseudo-Audiencism."' Business as usual, in other words. Randy's writing style is uncluttered and conversational, and his aesthetic is photocopied and hand-drawn, a winning combination. He promises that a fifth issue is nearing completion".—Matthew Moyer, Jacksonville P.L., FL
Posted by Randy Spaghetti at 7:13 PM