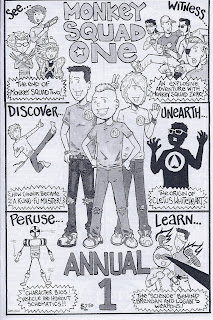 Monkey Squad One
Annual #1
By Doug Michel
banddmichel@gmail.com
This is the culmination of the first six issues of Monkey Squad One. A hell of a lot of work must have went into the making of this comic. There is so much happening and so much detail on every page. It really is amazing. Monkey Squad One is a light-hearted and funny comic about a group of seemingly innocuous youngsters whose home base is in a tree house that are on a never-ending mission to kick some super-villain ass. Doug, the artist behind this zine, has an obviously active imagination, and speaking from an educator’s perspective, was probably hell to have in class. This is an excellent introduction into that imagination and a great example of one artist’s dedication to his craft.
Posted by Randy Spaghetti at 7:50 PM