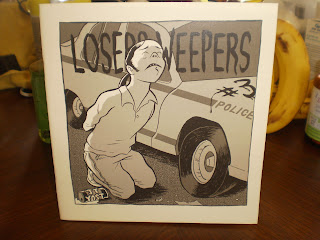 Raised is my glass as another issue of Losers & Weepers has graced my po box. The idea of creating a back story for something found - be it letter, cardboard scrap, or post it note - and then illustrating it, is one of the greatest gifts an artist can give to the world. This issue/episode of L&W is one of those gifts. There are four found items illustrated in this comic, all of which are great. Mr. Yost has a hilarious and somewhat sick sense of humor, all of which comes across splendidly in this zine. Of the four things illustrated, however, there is one that really stands alone. I won’t ruin the surprise here, but let me just say that I have never seen a more prominent example of lack of segue in a jailhouse letter than this. The artist’s interpretation of which, had me laughing loud enough to wake my entire family while reading it late into the wee hours….so funny.
Posted by Randy Spaghetti at 12:04 AM