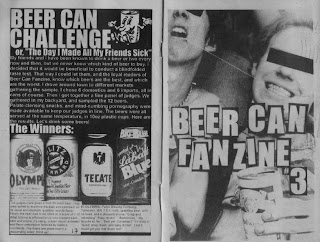 Jesse from the great Portland pop-punk band The Automatics published this zine which was centered around, well....beer and punk rock. The Automatics once played in my living room in Missoula. It was awesome. They were supposed to play at Jay's Upstairs but Jay's was overbooked. I said fuck it and had it at my house. I shot some drunken video of their set. The funniest part of the video is the fact that my house was so small that the vast majority of the people watching the show were watching through the windows.
Posted by Randy Spaghetti at 11:03 PM