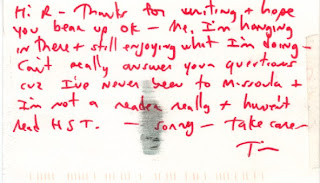 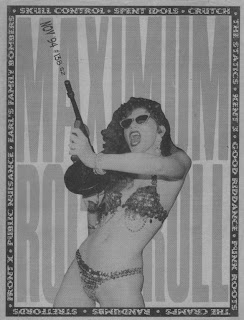 To say that MRR is my favorite zine is an understatement. I wouldn't even know what a zine was if it weren't for that fatefull encounter with MRR at a Helena Montana record store in 1990. When I first started thumbing though it at the counter, I had no idea what the hell was going on, it was so sloppy and full of weird bands and people that I had never heard of. But it looked cool and I have always been intrigued by the weird, pissed off, and opinionated of which MRR most definitely is. I picked it up and gave it to a friend of mine who was into punk rock. He tore into it and explained it all to me in a way that my thrash metal and mullet head could understand. It wasn't long before I lost the mullet and was reading MRR every month.
Maximumrocknroll is an institution. It remains the most consistent and relevant punk rock forum in the world. maximurocknroll Pob 460760, San Francisco, CA 94146-0760 (maximumrocknroll.com)

the postcard is from Tim Yohannan about a year before he died.
Posted by Randy Spaghetti at 8:03 PM