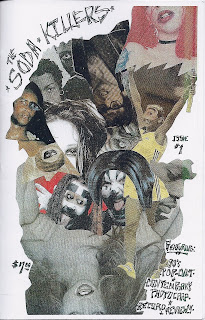 The bulk of TSK is composed of really well written record reviews by N. G. O’Brien which I spent a lot of time wading through and exploring. I read them all and during the process, discovered a few things about myself. For instance, I learned that I really don’t like the band Ice Age, but that I really really like the band Power (neither of which had I heard before reading these reviews ). The reviews are in-depth and entertaining, and made me want to check out a lot of stuff that I had not previously heard. This zine is put together by the same people that do Hot Dog Dayz zine and like HDD it is heavy on the collage which is heavy with pop culture icons, graffiti, and road kill. There is also a piece entitled, “I’m so uncool” where two people talk about things that they are either supposed to like or supposed to hate but do the opposite which I always think is interesting. Even the underground can have a herd mentality, and it’s interesting to me when people break away from the accepted norms of any culture. That being said, not liking Motorhead is unacceptable in any culture. Topping the issue off is a story about spending some time immersed within the underbelly of high school basketball, some more road kill, and a piece about being an asshole to fend of boredom. The Soda Killers is a lot like the collages contained within, an interesting and eclectic mix of seemingly unrelated stuff that comes together in weird ways and works.
Posted by Randy Spaghetti at 6:01 AM